Warning: This post contains mild Doctor Who spoilers. Just a few out-of-context names and photos of monsters; nothing that would ruin the experience for a newbie. Also, you’ll find some classic Sesame Street spoilers. So if you don’t want to know what comes after the letter B, stop reading now.

Geek peer pressure has led me to some great things.

For example: I am now in love with Doctor Who. It is a wonderful, wonderful show. I should have started watching it years ago, and now I’m catching up with the recent seasons via Netflix streaming. I’m devouring it: I sometimes go through three or four episodes in a day. I waited so long to get started because I was warned that there were monsters and deeply unsettling episodes, and that gave me pause. I’m not good with scary movies at all, and I avoid them altogether. With that in mind, I stepped gingerly, almost reluctantly, into the Doctor Who world. I was unsure what to expect from it, and from myself.

After three seasons, I can safely tell you: I’m not afraid of the monsters. And I think I’ve figured out why. Monsters aren’t real. That means they can’t be a real threat to me. Creatures with teeth and tentacles, wings and claws – they’re completely imaginary and therefore not taken too seriously by my brain. Sure, maybe I’ll flinch a little as they fill the screen, and I’ll fear for our dashing hero and his companion, but monster-filled nightmares don’t keep me up at night.

A monster with wings and screeching and nasty pointy teeth. Image from Tardis Data Core (Doctor Who Wiki)

The things that truly scare me, and leave lingering feelings of anxiety and dread, are people (or things) that have been transformed from something familiar into something terrible. And Doctor Who is full of monsters that are normal people whose bodies have been taken over by demons or telepathic aliens or angry energy-based life forms. Those are the ones that keep me from falling back asleep at night after I wake with a start. Because if the devil can take over someone’s body, how can I know that the shape sleeping beside me is really my husband? (I’ve already warned him that pulling out a raspy “devil voice” in the dark is grounds for divorce, no matter how much it seems like a good joke at the time.)

I realize that it’s a completely irrational fear. And it’s not like I spend every day sneaking glances at everyone for evidence of demonic possession. But those episodes leave me jumpy and agitated for hours, so I’ve had to ask my husband to warn me when one’s coming up. That way, we can wait until a weekend where I can recover properly if I don’t get a good night’s sleep after the credits roll.

This week, I met the Weeping Angels. They’re otherworldly assassins who take the form of angel statues, and who turn to stone if someone is looking at them. Look away, though, and they get you. You can’t even blink. 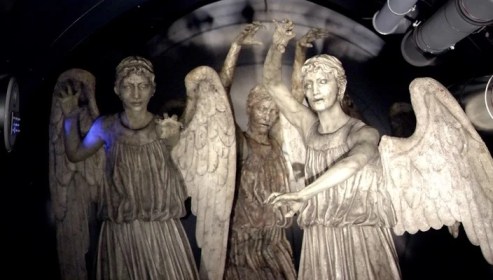 Weeping angels coming to get you. Image from Tardis Data Core.

It doesn’t help that vicious fangs and claws come out when they’re sneaking up on you, but even without those, the Weeping Angels are statues that move, and that freaks me right out. Inanimate things are not supposed to be animate and are especially not supposed to sneak over and get you while you’re not looking. It’s like possession, but of things instead of people. Just as scary.

My terror didn’t begin with the angels, though. My worry that inanimate objects may come to life started long, long ago, and this episode of Doctor Who woke up some very old and very strong memories. As I watched the angels move with each blink of their victims’ eyes, all I could see was Ernie.

When I was very young, maybe six years old, Bert and Ernie visited the Egyptian pyramids. Such intrepid explorers, wearing their explorer hats and explorer trench coats! Deep in the gloom of the pyramid’s inner chambers, they found statues that looked exactly like them. Ernie, sensibly, tried to turn back and leave these unsettling doppelgangers behind in their tomb, but Bert mocked him. Mocked him and left him alone with the statues.

Of course, what happens next is that the Ernie statue wakes up and bonks Ernie on his head. It happens twice, and both times he calls for help, only to receive sarcasm and ridicule in return. It’s his imagination, Bert tells him, running out of control and creating monsters where there are none. Well, he’s wrong, and it’s all true, and Bert sure as hell isn’t blaming his own imagination when the statue finally speaks to him, terrifying him and sending him running.

Even as a kid, I saw through the superficial message of the episode – control your imagination, and it will take you to wonderful places instead of scaring you – and internalized the darker subtext. There are times when people you trust will tell you something you fear, something you’ve heard or seen in the shadows, is “just your imagination.” And they will be wrong.

I was afraid of my stuffed animals for months.

And now I’m not so sure about statues.